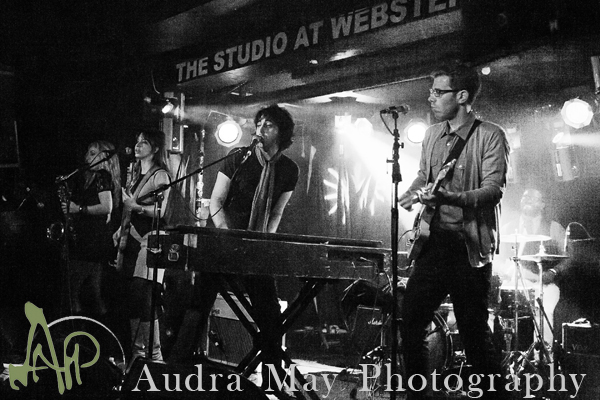 It's definitely taken me longer than usual to work through the words for this post. This entire year has been a journey for me, one in which I'm grateful for because I'm learning so much. It's my goal to continue on this path, even when I struggle. In fact, it's more important to forge ahead during the struggles. I went back and forth over posting more of my personal story in a concert review for many reasons, but in the end, I decided I would. This blog isn't just a place to showcase my work; I feel like it is a place where I can let you know more about me as honestly as I can.

All right, enough dribble. Let me tell you about the show.

This was the last night of the CMJ Music Festival, so there was a split bill. I have never been all that interested in music festivals. I feel like the shortened set doesn't give you a real feel for the band. I also imagine it being hard for the band; sometimes playing to a room full of people that aren't even there to see them, yet their goal is to impress the audience enough to want to hear more.

I came out in support of Eytan and the Embassy. They are an impressive up and coming band that I had the pleasure of photographing back in September at the Knitting Factory. You can see those pictures and read a much more positive review here. What sets Eytan apart from the other bands I saw that night, in my opinion, is their solid song writing. In the middle of bands featuring guitars and sample pads, they brought keys and a baritone sax. It felt like they didn't quite fit in with the other bands on the bill, but I say that in a good way. They stood out. 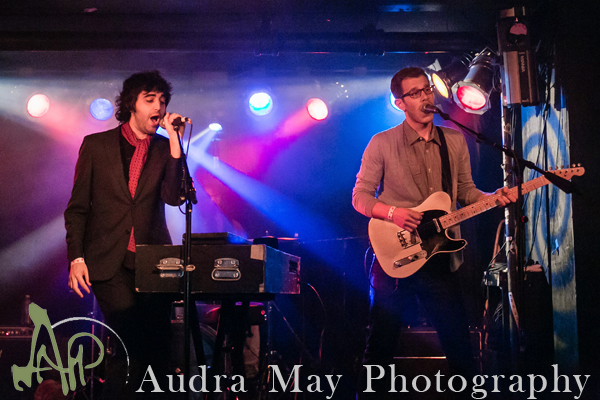 The Studio at Webster Hall is loud and dark. I am not going to deny that these pictures went through some heavy post processing. As I was shooting, I struggled with the lack of light. I bumped my ISO up way more than I liked which resulted in some very grainy pictures. I'm ok with that because that's what this night was. When I worked at Milford Camera Shop back in the early 00's, we still shot film. When I shot bands back then, I liked to use a high speed black and white film with tons of grain. It felt gritty, dirty, like you had to force it down. This is a band that is on their way to something big. On their journey, they're playing smaller venues, short sets with less than ideal sound for their instrumentation. For me, I have to fight with light. When it's a band you really want to champion for, it's not such a hard fight. 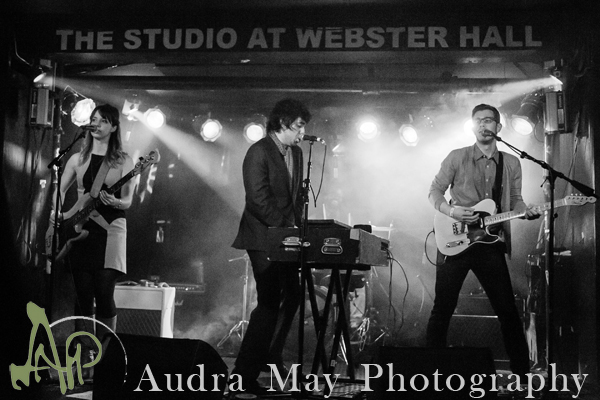 What's great about being able to shoot a band you've seen before is that you have a better feel for the way they perform. With any piano/keyboard front man, it's tricky. You want to be able to see their face, so I tend to pick the side they are facing and shoot from that angle. I learned the first concert that Eytan moves around quite a bit, so I stuck to the front of the stage. It was a completely different experience from the first concert, from the perspective alone. 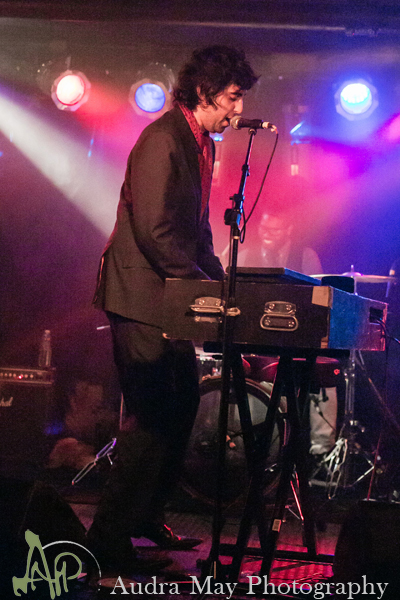 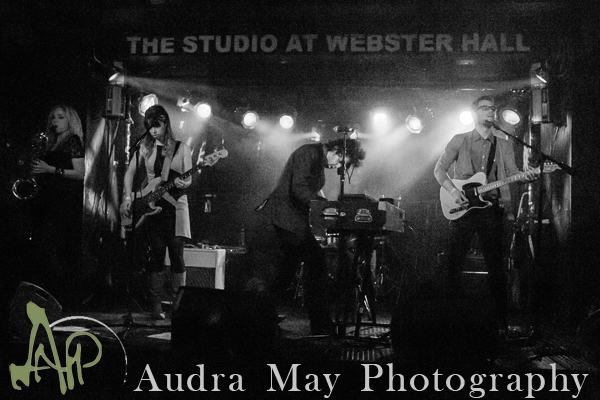 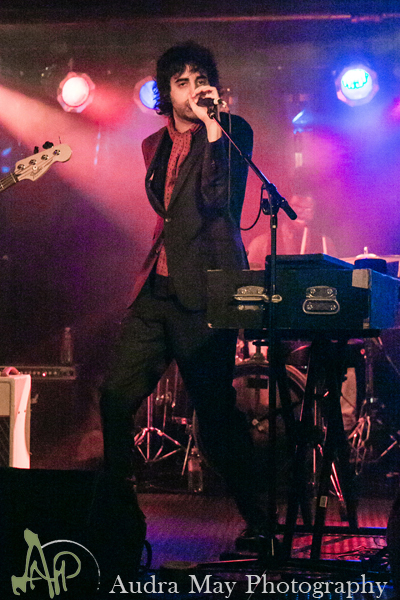 Eytan had plenty of swagger, which was great to see. It felt like a mixture of Mick Jagger and Liam Gallagher every time he grabbed the mic and focussed on the vocals. 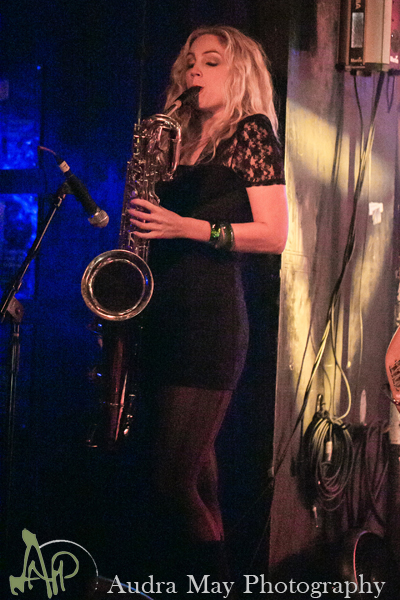 Saxophone duties were handed over to Jackie for the night, while I believe Geoff was performing on Saturday Night Live with Bruno Mars. When I saw the band play at the Knitting Factory, the only thing that felt a bit off was the horn representation. I'd love to see two saxaphones up there being able to round out the harmonies and give them a fuller sound. 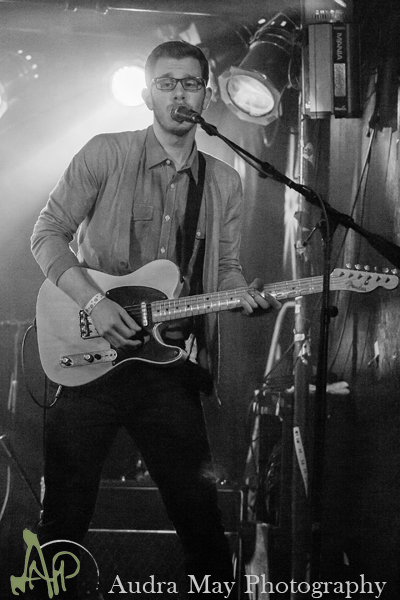 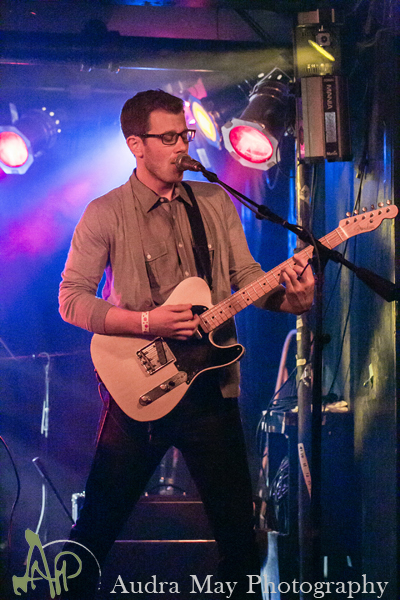 I also missed out on a lot of pictures of the guitarist Anthony Rubbo at the first show, so I wanted to make sure I got a few shots of him on stage this time. 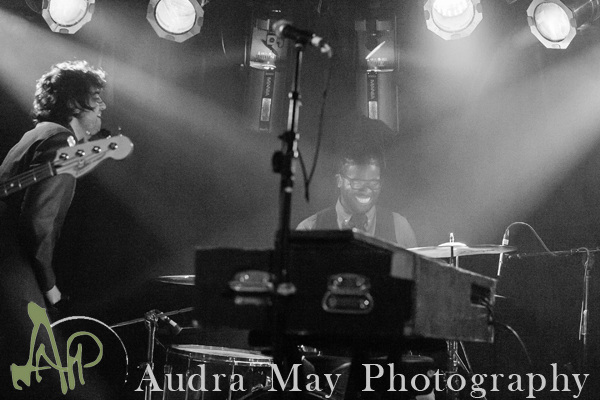 Drummer Attis has a smile on his face the entire time he is on stage, and I have plenty of shots to prove it. 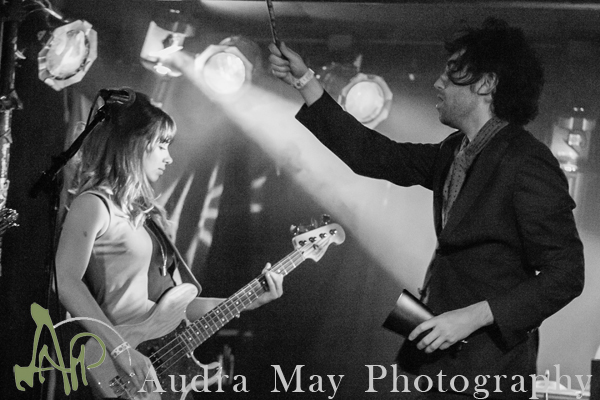 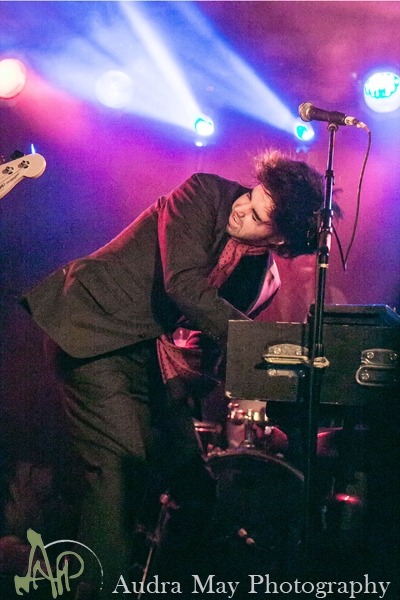 Eytan was full of energy and the above shot is my favorite of the night. How can you not appreciate a head banging keyboardist? 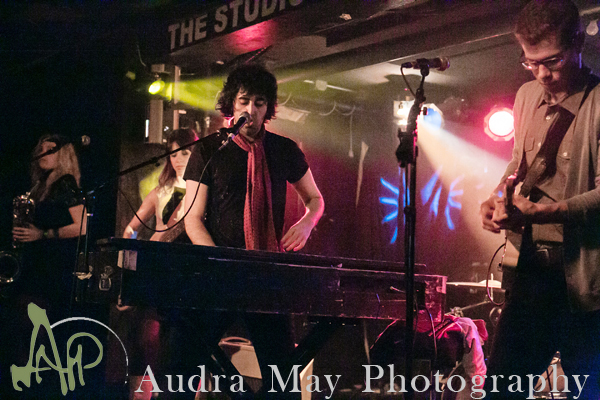 As I said at the beginning of the post, it was a very short set due to time constraints. It was either four or five songs, which really didn't give me a lot of time to play with compositions. I moved to the right of the stage for their last song to change things up a bit. 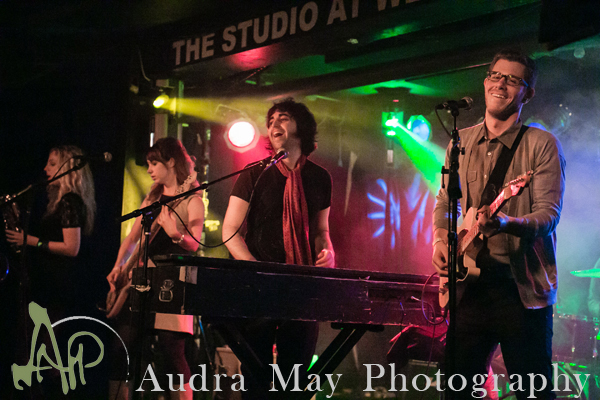 This was a fun moment as their fan base cheered at the start of their popular song, Everything Changes. Being able to capture these interactions is my favorite part of photographing concerts. 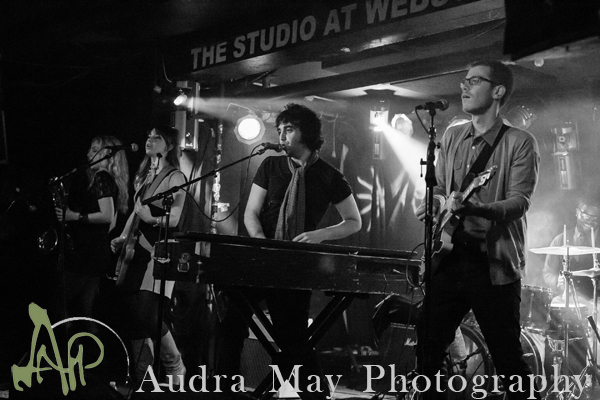 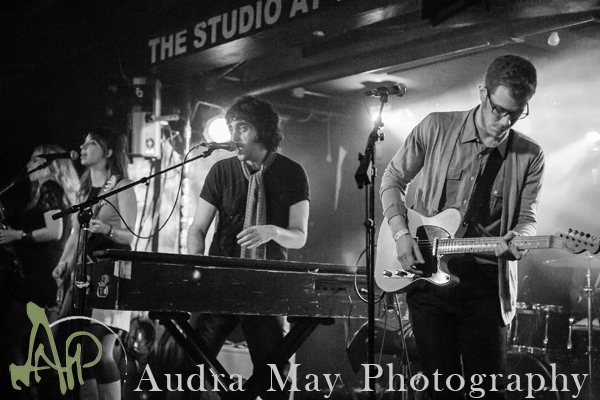 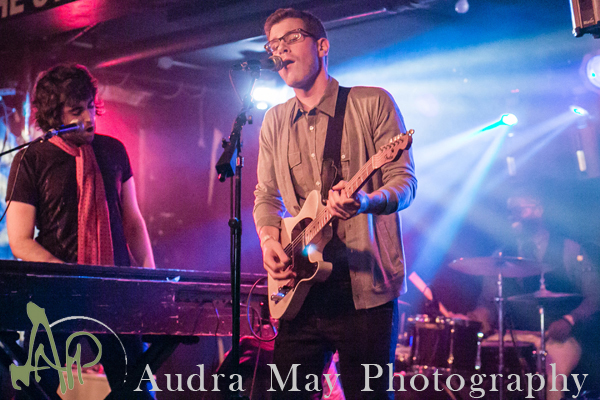 And look, Attis is still back there, keeping the beat and smiling! 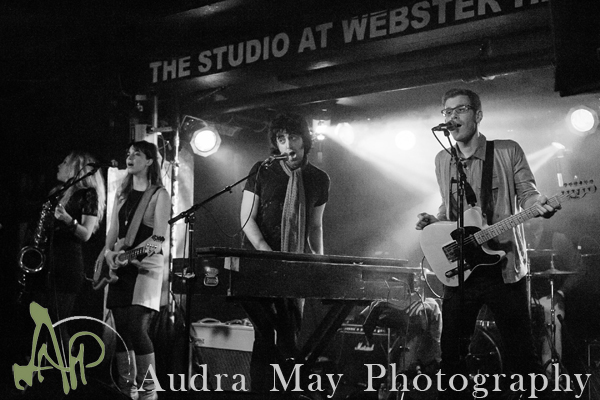 This is definitely resulted in one of my smaller sets of photographs from a concert. At the time I shot them, I wasn't happy with what I got, but once I started working on them, I got over it. I was in a very strange head space at this concert. I latched onto the rushed vibe of the night and didn't have a chance to really settle in and shoot the way I like. I feed off the emotions of others, which is what usually gives my photographs that extra something. It's not easy when it goes the other way, as I explained in this post from March.

My friend and I stuck around for the next band, but I didn't really feel like shooting or talking much for that matter. I'd gone through a pretty intense month prior to this concert, attending six concerts and shooting five of them. All of the emotions of those experiences hit me at once and I really just wanted to get home and reflect. I've had plenty of time to do that now, so I'm able to express it.

I think the hardest thing for all of us to admit to is that we don't have a clue. When I was younger, I'd look at the adults and think they had it all together. That life was this simple path from point A to point B. I've always felt that I should know what to do with my life and I've judge myself harshly for the many stumbles I've made. I'm coming to terms that this isn't exactly the case, and that I have to cut myself some slack. I'm trying to figure out what to do with my passion in life, my photography. I've had some amazing breaks lately and I've built up an impressive portfolio of work to be able to showcase. It's no longer a case of can I?, but how do I? And that's the scary bit.

Again, my apologies for getting so introspective in a concert photography post. It wasn't my intention, but that's where this post took me. I guess what I want people to know is that none of us have it all figured out; I certainly don't. But that doesn't mean we're doing anything wrong. It's just another path we have to walk on. I hope you keep joining me on mine.

And for the love of everything you hold dear, check out this damn band! You have another chance to check out Eytan and the Embassy November 15th, at the Highland Ballroom. They are opening for The Dirty Guv'nahs. Info is here. Many thanks again to Eytan and Drew for allowing me to shoot and my apologies for being antisocial that night.

Oh! And if you're wondering where the shoe shot of the night is, well, I've already done that picture. Look here.
Posted by Audra Napolitano at 11:17 AM

Email ThisBlogThis!Share to TwitterShare to FacebookShare to Pinterest
Labels: concert photography, Eytan and the Embassy, The Studio at Webster Hall