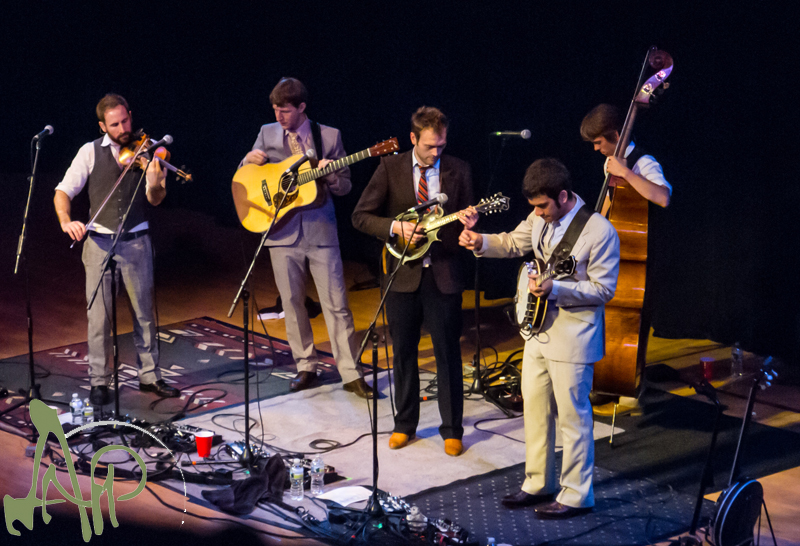 The Punch Brothers from left to right are: Gabe Witcher violin, Chris Eldridge acoustic guitar, Chris Thile mandolin, Paul Kowert upright bass and Noam Pikelny on banjo. As I stated in an earlier post, their music is categorized as progressive bluegrass, yeah, I know, ridiculous. What they are is a young band, all in their mid 20's to early 30's. Every single one of them is an amazing musician, and Town Hall was indeed, the perfect venue. The crowd gave them thundering applause for every solo, they clapped along to the music and it was probably the most feel good show I've ever seen. Seriously, my face hurt from smiling so much, being able to experience musicians who are the best at what they do, having a great time and sharing it with the world.

I've been having a hard time with this post. Every concert, I try to explain what it was like to be there, which, I've come to learn, is one of the hardest things you can do. Words fall flat and sometimes the pictures do, too. I'm not going to lie, there are some venues where they really don't want you to have a camera. Town Hall is one of them. Security was really tight and they kept walking around throughout the concert, telling people to put their cell phones down, that they weren't allowed to shoot video. I was as respectful as I could be, shooting 15 pictures the entire night. I shot around 400 frames at Hotel Lights and they only played for 45 minutes, and Gotye was closer to 800 and that was with a braced wrist. 15 pictures felt like a joke and it was killing me to not shoot the way I've gotten used to. It was a couple frames here, shooting through the railings there, during the encore when everyone was standing and blocking a view of me with a camera, etc, etc. This was definitely a night where I would've killed to be the photographer who was walking around with a press pass. The guy probably shot 15 or so frames and then took off; I was proud I didn't attack him and steal his gear for the night.

Anyway, the limited shots that I took were all pretty solid and even though there were so many more that I wanted to take, I feel like I still captured their energy and personality really well. I hope you enjoy! 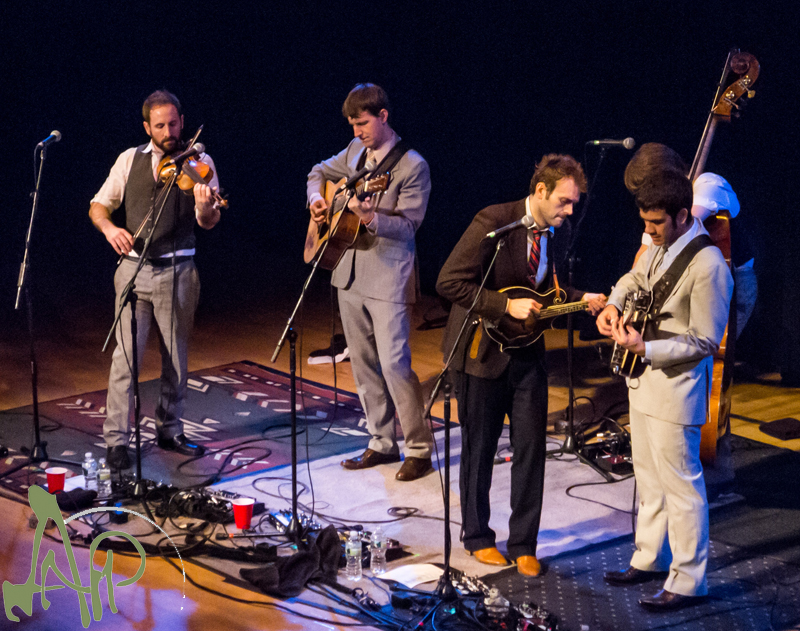 Any time there was a solo, Chris would be there and he would counter it. The improvisational skills of the entire band is jaw dropping and I'm not even going to waste time trying to put it into words. You have to experience it. 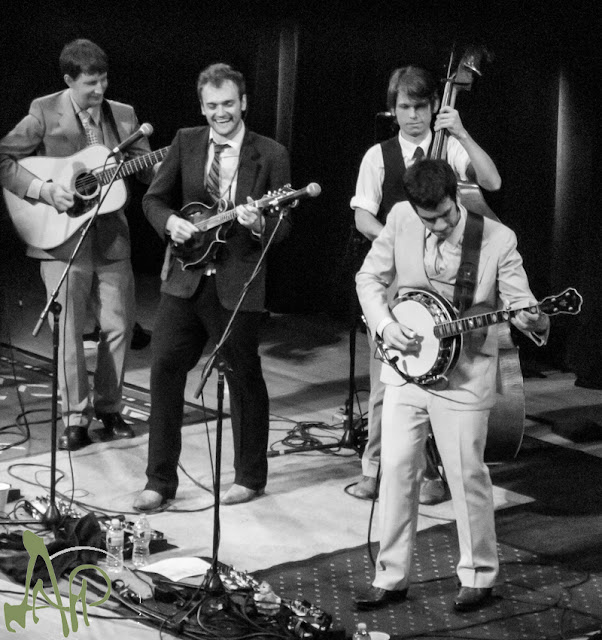 What I loved most about the Punch Brothers is the amount of fun they are having. They are a group of young guys that are having an absolute blast making music and sharing it with their fans. Even though I shot a very limited amount of pictures, I still captured this, because it happened every single song. 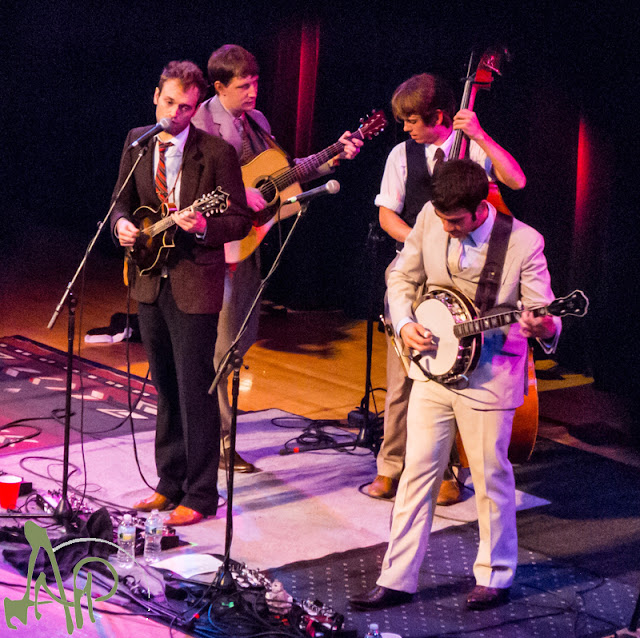 In between songs, Chris joked that he was so low energy tonight, to which Noam immediately quipped, a humming bird on Ativan is still a humming bird. I couldn't have said it better. 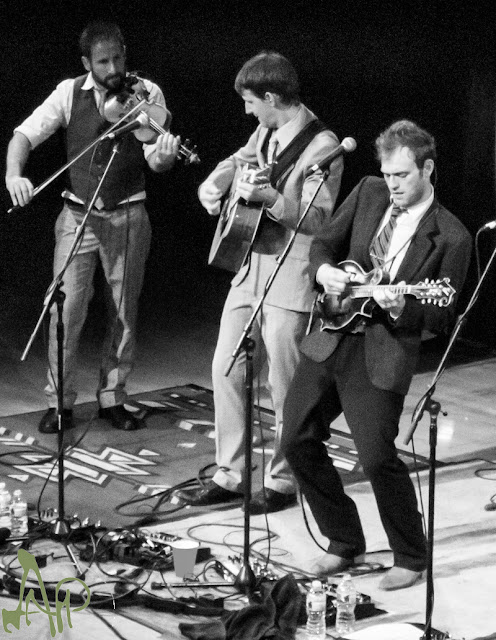 Chris Thile rocks the mandolin as though he was busting out raging guitar solo. 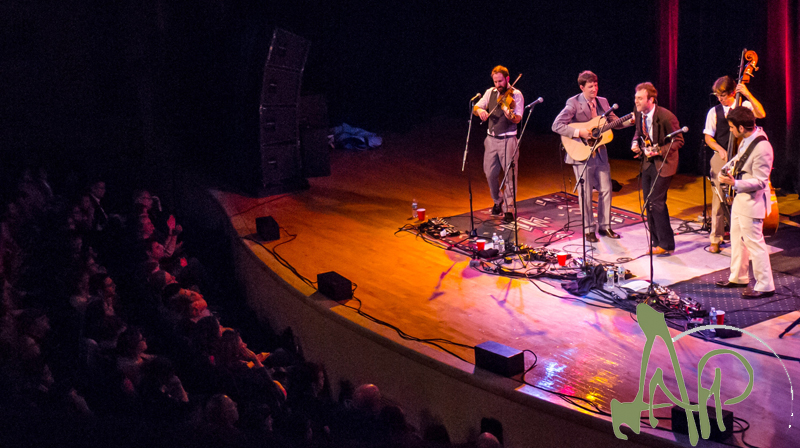 I pulled out for a wide shot so you could see how intimate a venue Town Hall is and was lucky enough to capture just a fun interaction shot. The band was so appreciative to every round of applause, every shout out and they have so much fun doing it.

They closed out the night with Rye Whiskey, which has a fun audience participation bit. Everyone was clapping along and having a good time, when, out of the corner of my eye, I saw a man running down the aisle on the left of the stage. I then noticed one of they yellow jacketed security guards following after him. I thought, huh, what's that all about? The next thing I knew, the man had jumped onto the stage and started dancing. It was completely bizarre and surreal, but the band kept going. They didn't freak, they kinda laughed. The guy dropped a jacket in front of Chris and then danced right off stage. At the end of the song, the band left as well, for a very short round of applause, before they came back. 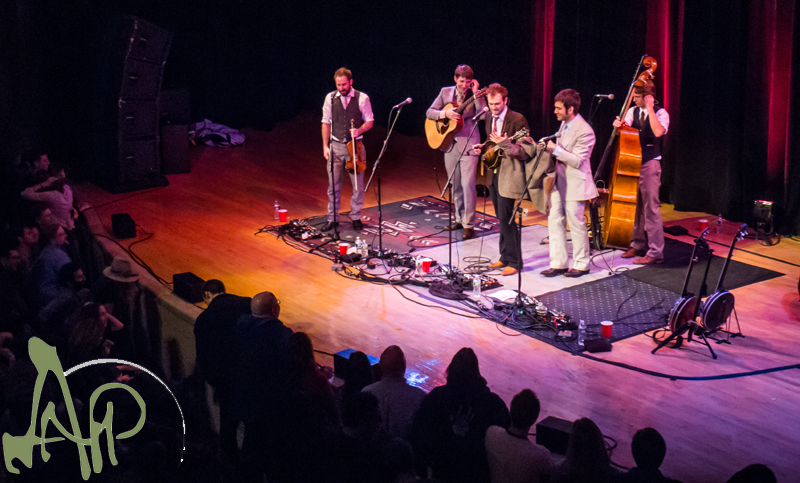 Chris and Noam trying on the jacket the stage rusher left behind. It was a really nice elbow patched tweed suit jacket. The band couldn't stop laughing as they announced that was their first stage rush ever, and they were shocked at how respectful and subtle it was. 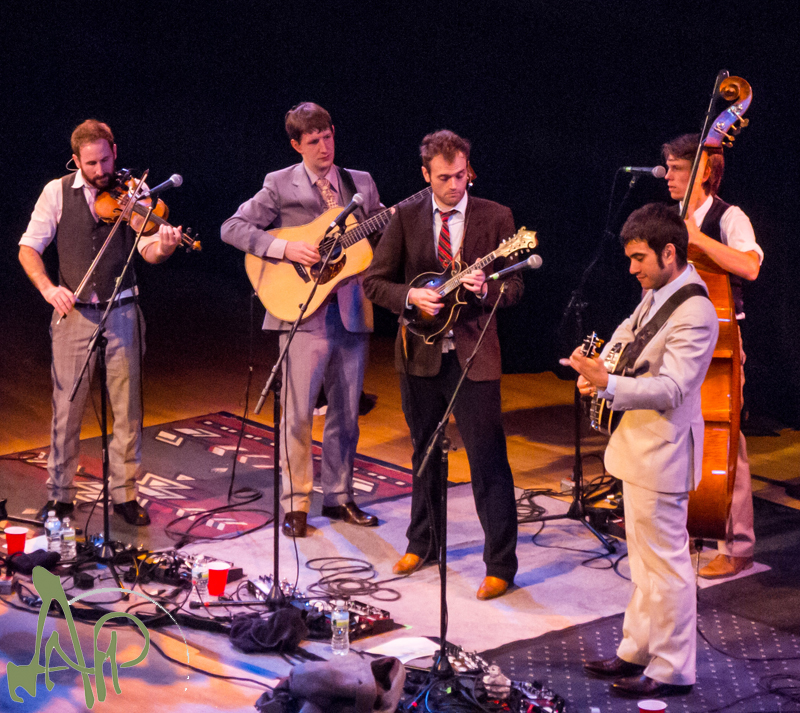 One of my favorite songs of the night was a cover of Just What I Needed by the Cars. Imagine that song with banjo and fiddle solos. Absolutely hilarious. 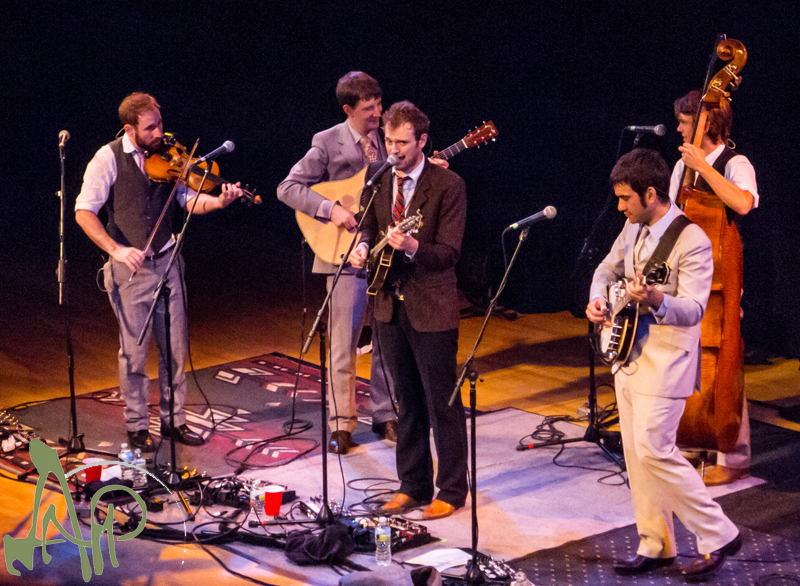 The entire band has such an amazing stage presence, and Chris really does make a lot of eye contact with the fans. 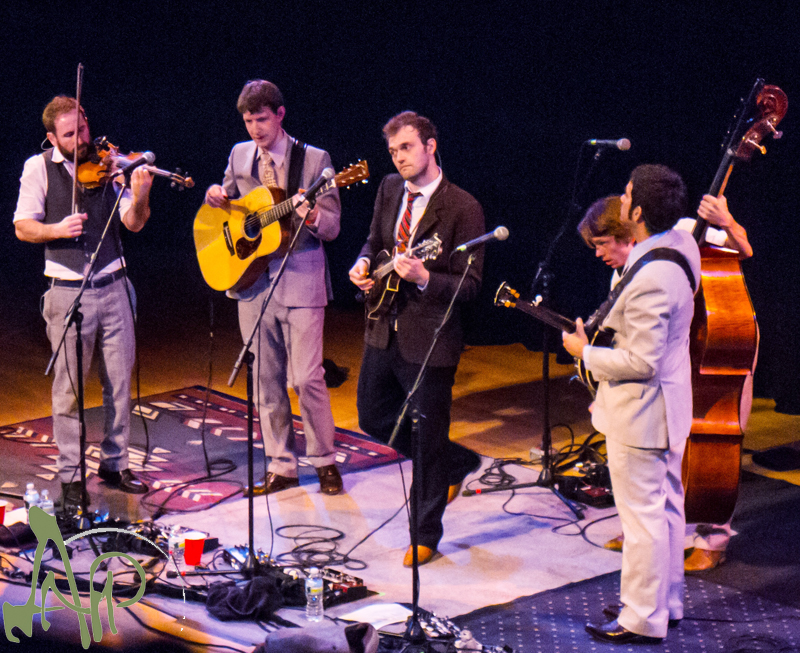 What I didn't really capture as well as I would have liked in stills is just how much Chris moves around on stage. The band would gather really close and I kept thinking, he's gonna nail one of them.

Since I couldn't get a good still of this, I did something I rarely do: shoot video. This is a snippet from Kid A, which is a Radiohead cover, interpreted blue grass style. It's really incredible as a whole, and this little piece does it no justice.


The encore was three songs, two of them being tributes to recently deceased musicians. The band unplugged and moved to the very front of the stage. The entire audience immediately hushed, respectfully to be able to listen. Noam explained that Earl Scruggs was a main influence to him growing up and was the reason he picked up the banjo. The shot below is from that song and it's my favorite of the night. They then announced that they were going to cover Levon Helm's The Weight and they asked the audience if they wouldn't mind singing along. This was my fifth concert of the year, and I am absolutely positive I will never experience anything like this moment again in my life. It was beyond touching and heart warming. Imagine hearing an entire audience sing along at Town Hall, where the sound is just warm and carries. Having the band unplugged and singing without microphones just made it that much more special, and the crowd, myself included, had the harmonies down pat. I've been struggling to find the words to explain how awesome this was, and I've finally given up. Words can't describe it, and that's why you need to be there, seeing a live band doing what they love and connecting with their fans.

All I can say is thank you, Punch Brothers.

And of course, here are their shoes.

Posted by Audra Napolitano at 10:12 AM