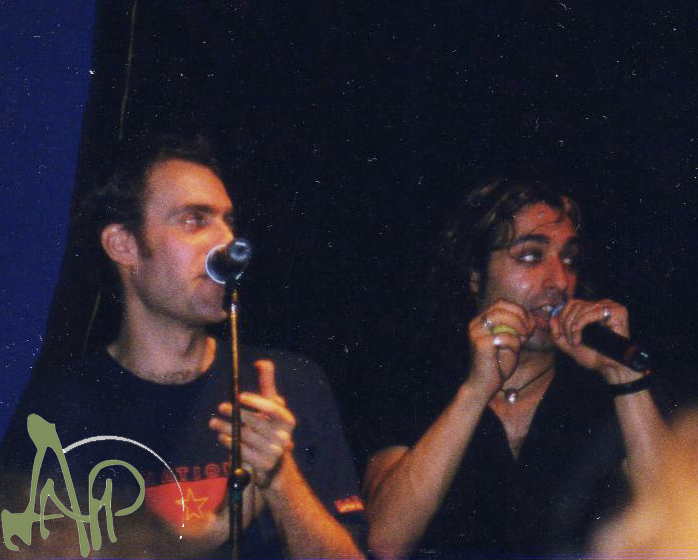 One of the major reasons I dug into the crawl space was to be able to bring you some of my first forays into concert photography. This shot is Murray and Jian from Moxy Fruvous, taken in 1998 at The Met in Rhode Island. I remember this venue was the size of a closet, and boy howdy, was it an eventful night!

I wrangled a group of college friends to go with me and a couple friends from Milford drove in to meet us. Lisa D. and I were bumped into before the show by none other than Jian. He apologized profusely, so cute.

So I'm rolling with a posse 8 or 9 people deep and we're all having an absolute blast: singing along, laughing and being pretty loud in general. Now I hadn't seen my Milford friends in months because I was away at school, so we had a boisterous reunion. Lisa D. is also very short, so at one point, I offered to let her sit on my shoulders so she could see. I came very close to dropping her, so I shouted that I needed to put her back down. Before I had even fully stood up, I was grabbed by the concert goer directly to my right. He had me by the collar of my shirt and was screaming in my face. It was something along the lines of him complaining about me and my group being obnoxiously loud and ruining the ILLEGAL BOOTLEG he was trying to make. I kid you not.

To this day, I do not know how a fight didn't break out over this. I think I was more shocked than anything else that this grown man had grabbed and shook me, an 18 year old female, and didn't retaliate more than sternly telling him to get his hands off me and to keep them off if he knew what was good for him. But wait, this story gets better!

Later on in the concert, the band gave a shout out to their webmaster, who was in attendance. Guess who that was? Yep, Mr. Anger Issues himself, Chris O'Malley. You can check out his stellar design work over at MoxyFruvous.com. (Heavy on the sarcasm) I wasn't about to let his behavior go, so I went back to my dorm room and wrote him a not so nice email. He defended his actions and gave me a half hearted apology. It's been 14 years and I still think what he did was REALLY wrong, I want you to know, I forgive you, Chris.
Posted by Audra Napolitano at 8:39 AM