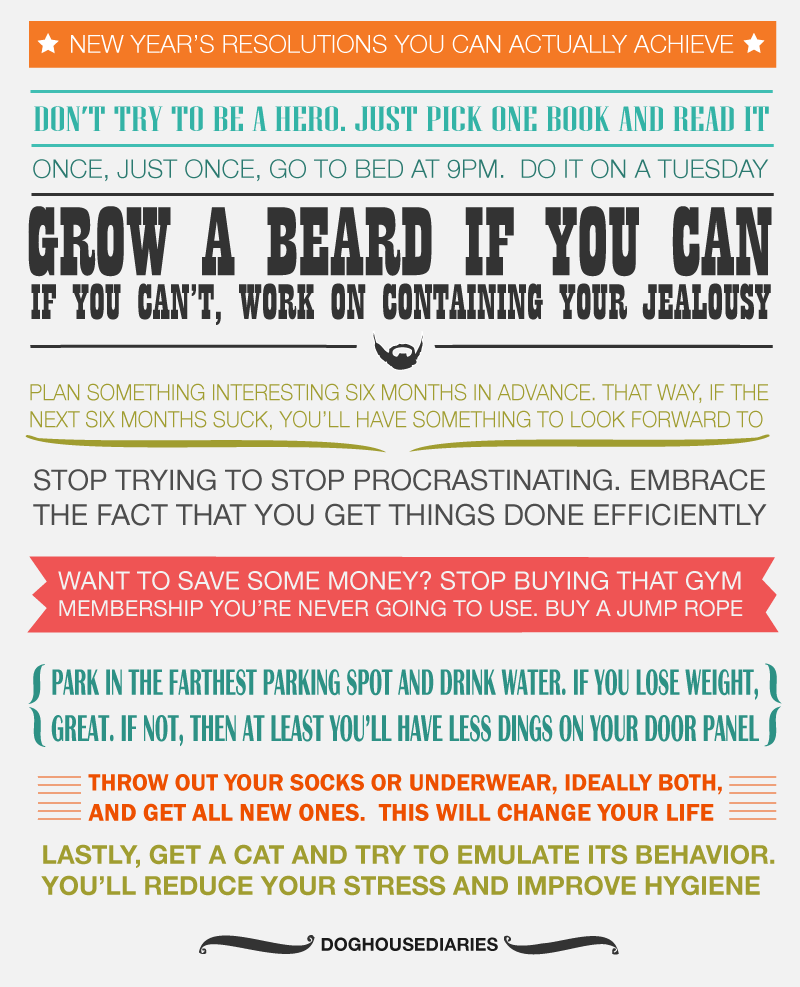 Ok, so every year I set up a list of goals that I want to accomplish. I dislike the word resolutions because I feel like that puts a lot of pressure on yourself. Last year, I didn't reach many of my goals. This year, I'm repeating some of those goals and I've added new ones. I'll repost this at the end of the year to let you know how I've done.

1. Grain free by the end of January
I had a pretty decent paleo diet going that lasted 4.5 months. I went off of it for the holidays and immediately felt the effects. I'm not gluten intolerant, but I definitely feel better without it in my diet. I also know that it's not realistic to expect myself to jump back on it after eating whatever I wanted for 1.5 months. I thought I should try to ease back into it and try to remain paleo for as much of the year as possible.

2. Photo Challenge: Shooting Calendar
I've written objects on 31 slips of paper. Each day, I will pull a piece of paper and take a photograph of the object listed. At the end of the month, I'll start over. I think I'm going to upload these at the end of the month as a collage on my blog, but hopefully I'll upload them onto pinterest each day. I'm not starting this until February because I've gotten such a late start on my goals post.

3. Go to the gym 5x's a week for 10 weeks
The first week of this year has been a wash as I'm recovering from a sinus infection. As soon as I feel better, I'm heading back to the gym.

4. Give Blood
Since I'm posting this late, I'd like you to know that I've already achieved this goal and am signed up for my next donation!

5. Play Basketball
I had a friend from URI already offer to get together with me and play a pick up game. I do have to say, John, Rob and I came in second place in our dorm basketball competition my freshman year. Nobody thought the band geeks would be so good!

6. Run a 5K
I have several friends that are runners, and although I don't think running is the greatest thing for my knees, I want to give it a try. I have some nifty new Xero shoes that I need to test out!

7. Shoot with online photographer friends
I used to shoot with my friends all the time, but really haven't done that in the past few years. I have a couple of tumblr photographer friends that are in the area and we've talked about getting together to goof around with our cameras.

8. Shoot more concerts than last year
I think this is my most ambitious goal this year as I covered a lot of shows last year.

9. Fall foliage
I want to get outside and get some nice scenic shots this year.

10. Find a new dentist
I've been going to the same dentist my whole life, but my current insurance isn't taken by that dentist. Le sigh.

11. Take a trip to Maine
I haven't been to Maine since I was a teenager and I wasn't much of a photographer then. I want to get up there to hike and take some scenic shots, hopefully even catch the Northern Lights.

12. Find a word press template I like and transfer website over to it by 2015
I'm hoping this will force me to learn a bit of web design.

13. 30 second flexed arm hang
This is my ol' reliable goal that I've failed for the past three years.

14. Convince Andy Stochansky to record a new album and tour so I can photograph him
I feel like I should include one truly outrageous goal for the year and seeing how it's been at least a decade since I saw Andy play live, I've come up with this one. No pressure, Andy, no pressure. And since I've been slacking in my blog posts, I'm throwing in my 2014 playlist. The new songs have been uploaded into the player up top there. Check them out; it's a pretty chill mix this year.
Posted by Audra Napolitano at 10:00 AM