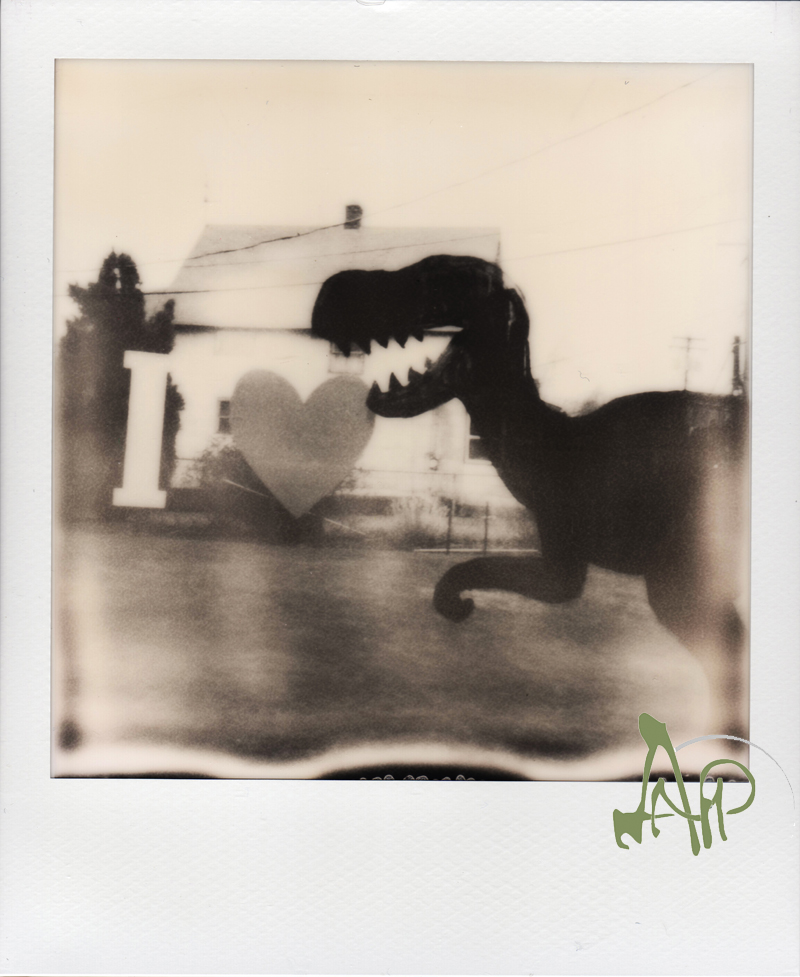 In the grand tradition of my blog, I bring you the third installment of National Velociraptor Awareness Day! It started as a joke and is still the most viewed blog post three years running. Feel free to check out the original post and 2012's edition. This year, I decided to combine a couple of my passions: Velociraptors and Polaroid Photography. There is a company, The Impossible Project, that is still producing film for your Polaroid cameras. My main camera is an SX-70, but I also have a Spectra that I've been playing around with. For all of these shots, I used the SX-70. I created my own custom filter to project a lovely velociraptor onto all of the pictures. 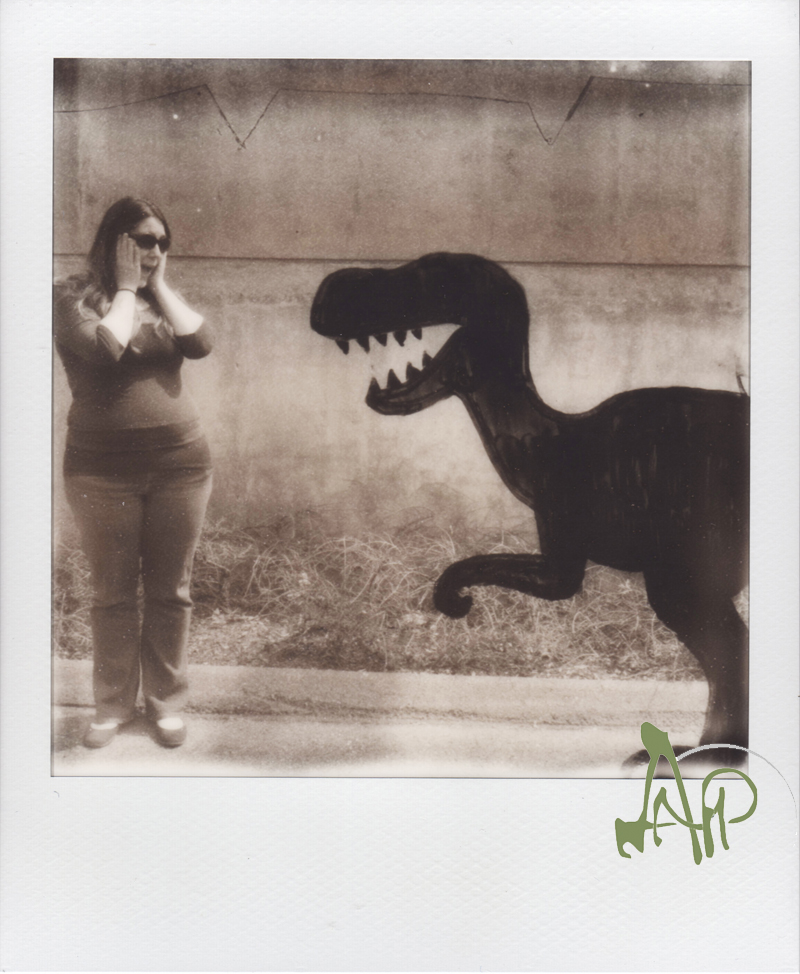 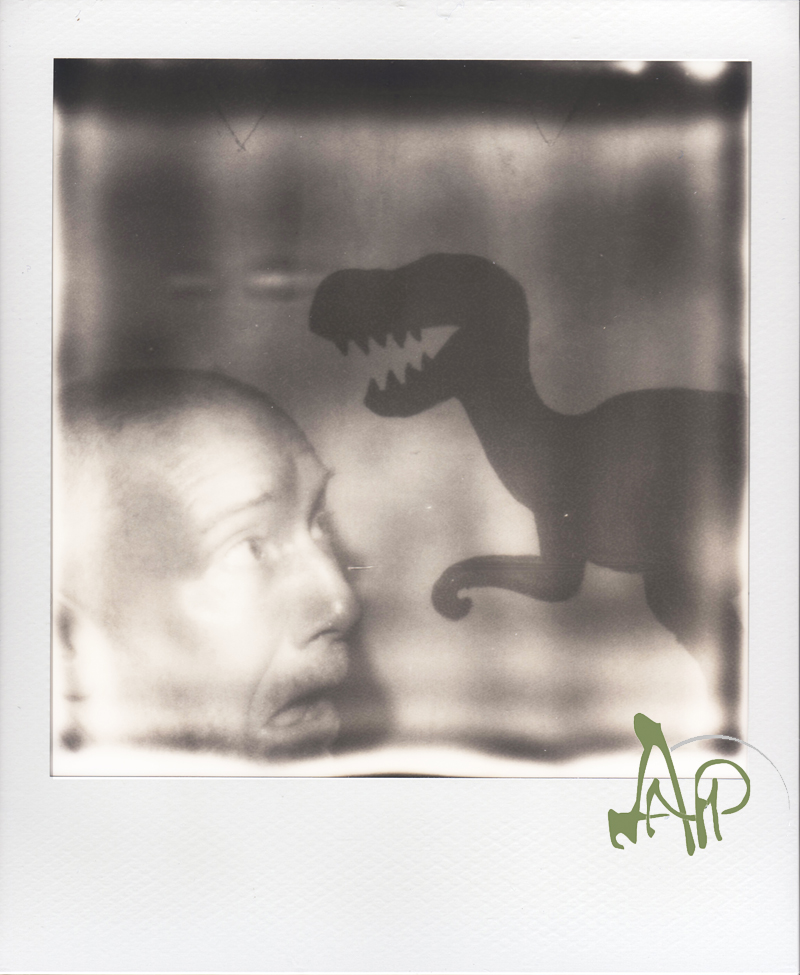 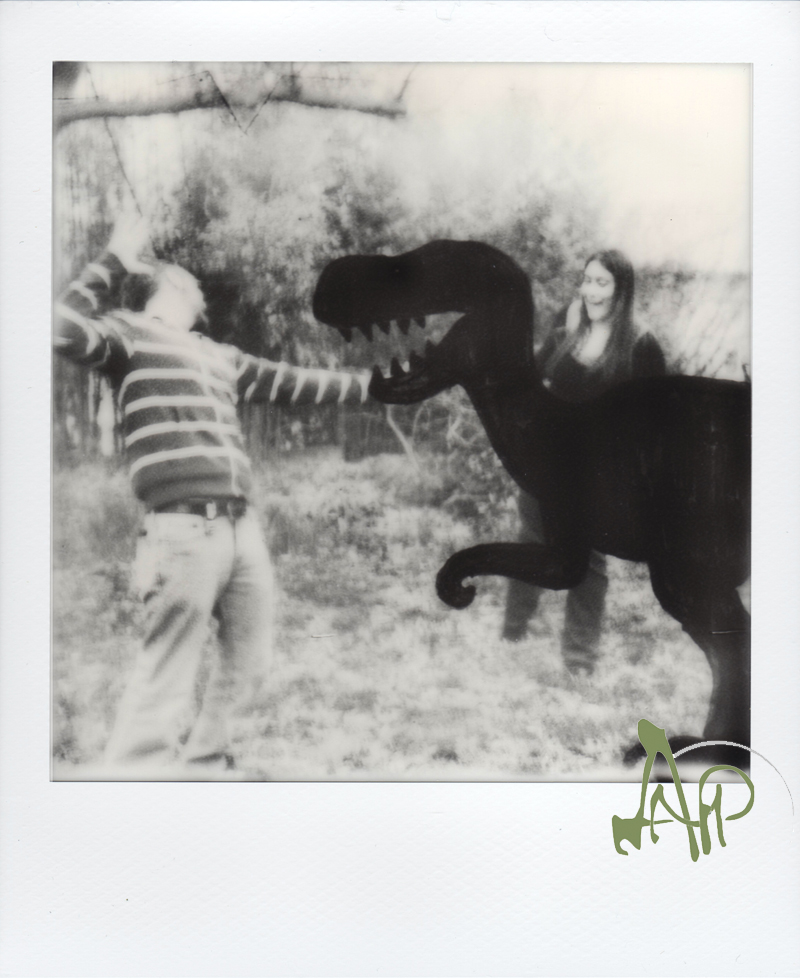 What I used to make this custom filter:

• Clear Plastic. I used a presentation binder from Staples that cost me 88 cents.
• An original Impossible Project ND filter to trace the shape.
• Marker. I used a Sharpie, but it projected a little to streaky for my taste. I'll have to experiment more with different markers. 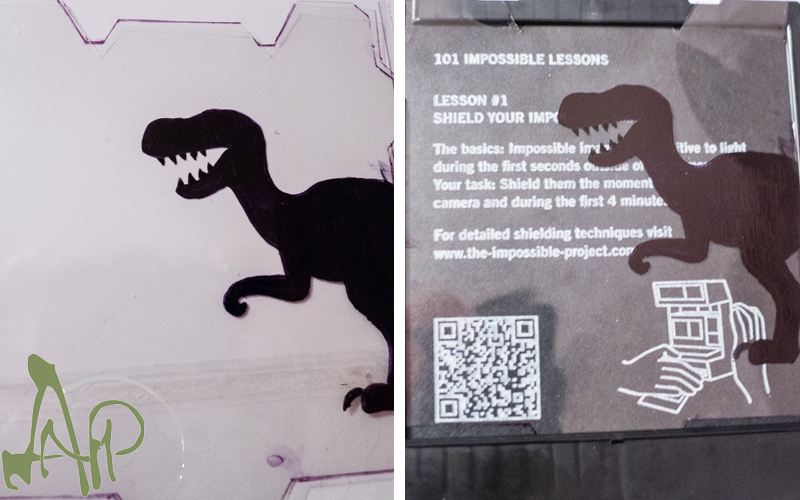 Shots of my Raptor filter drawn and placed on a pack of Impossible Project PX100 film.

What I learned from this experiment:

• Remember where your design is! While it might seem like a no brainer, you have to remember that you aren't going to be seeing it in the view finder. I drew the raptor a little too large; it took up more than half the frame.
• The size of my filter was slightly too small and started to slip after a few shots. If you look closely, you'll see the outline of the filter on the top of the photographs. I also lost the most distinguishing characteristic of the velociraptor: its claw! I feel like the scale let's you know that it's not a T-Rex.
• Don't shoot against anything dark. For the most part, I put my subjects in front of a blank wall, but I lost a fun pose because I wasn't thinking about my background.

Here are some of my less successful shots: 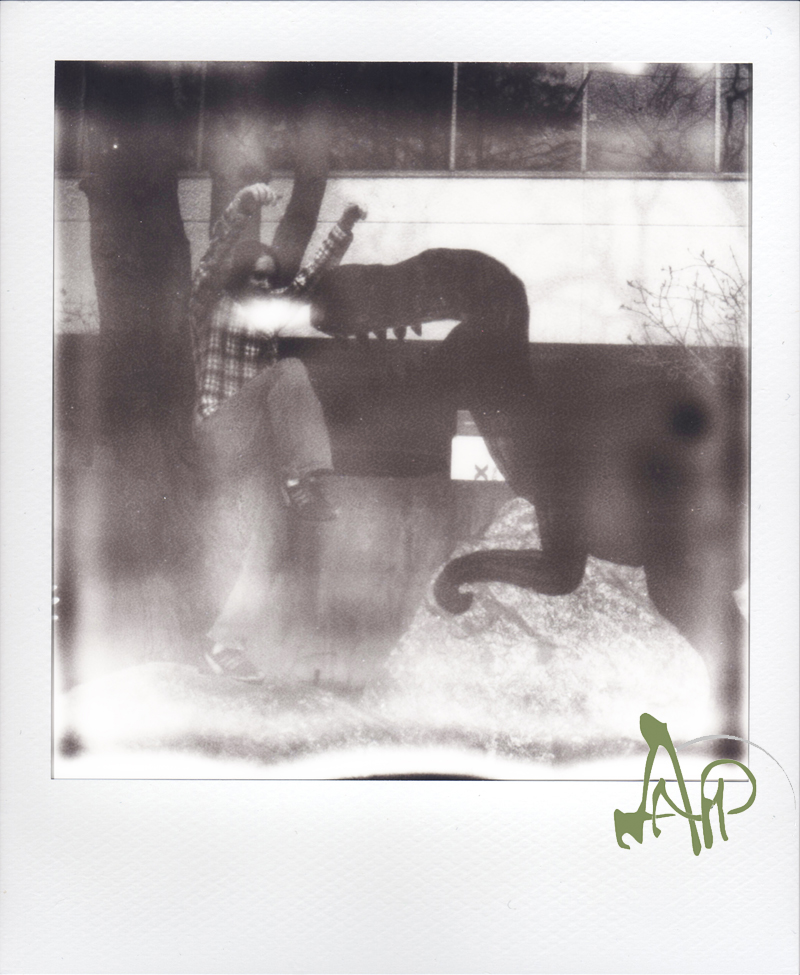 Chris wanted to do a Crane Kick, but the raptor was lost because of the background 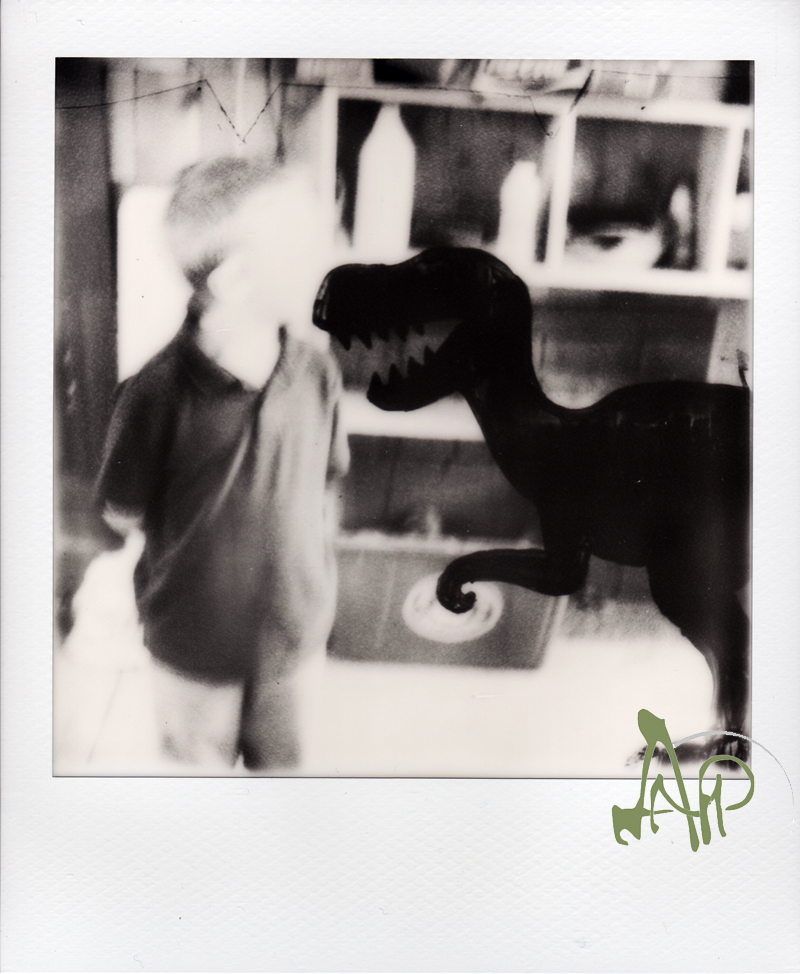 James, who is always up for my crazy photography experiments, came out overexposed and you can't see his expression. I shot this inside and the camera was thrown by all the window light. 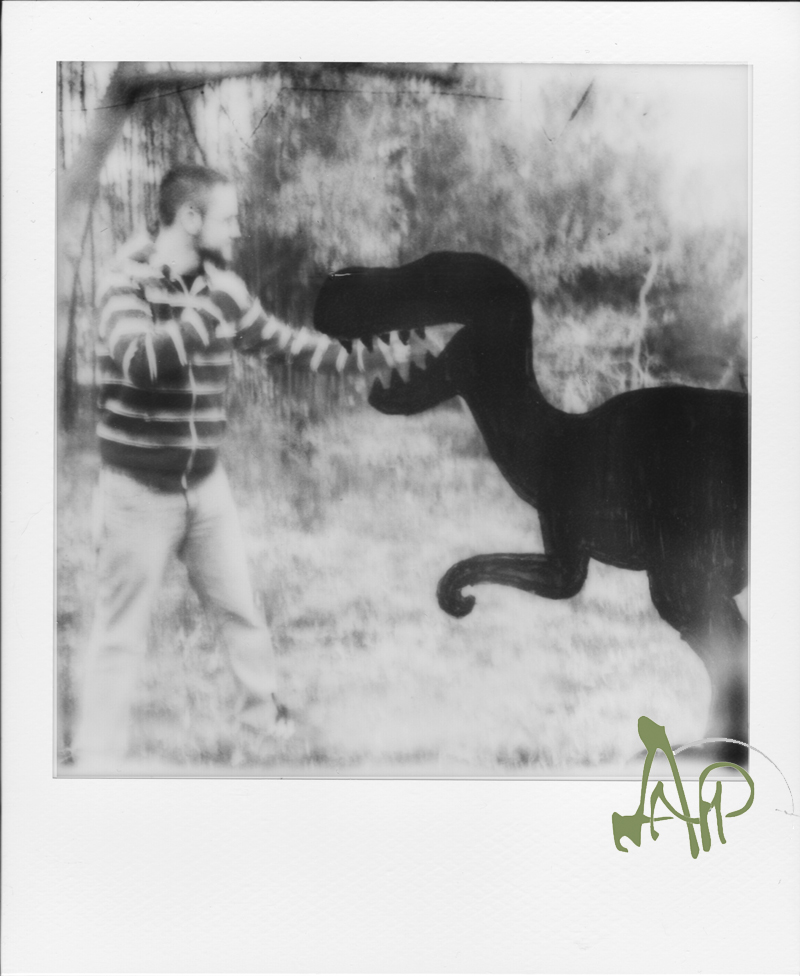 Brett wanted to be uppercutting the raptor, but his hand wasn't low enough. It looks like the raptor is eating his hand, which is fine, but I didn't feel like his reaction matched the scenario.

I hope this year's National Velociraptor Awareness Day post lives up to your expectations. I always have a blast coming up with something you haven't seen before. Thanks to all my friends who posed with nothing besides them. You guys are the best!

If you'd like to see more of my Polaroid photos, head on over to my flickr photostream here.

Until next year, my fellow velociraptor lovers!
Posted by Audra Napolitano at 10:00 AM