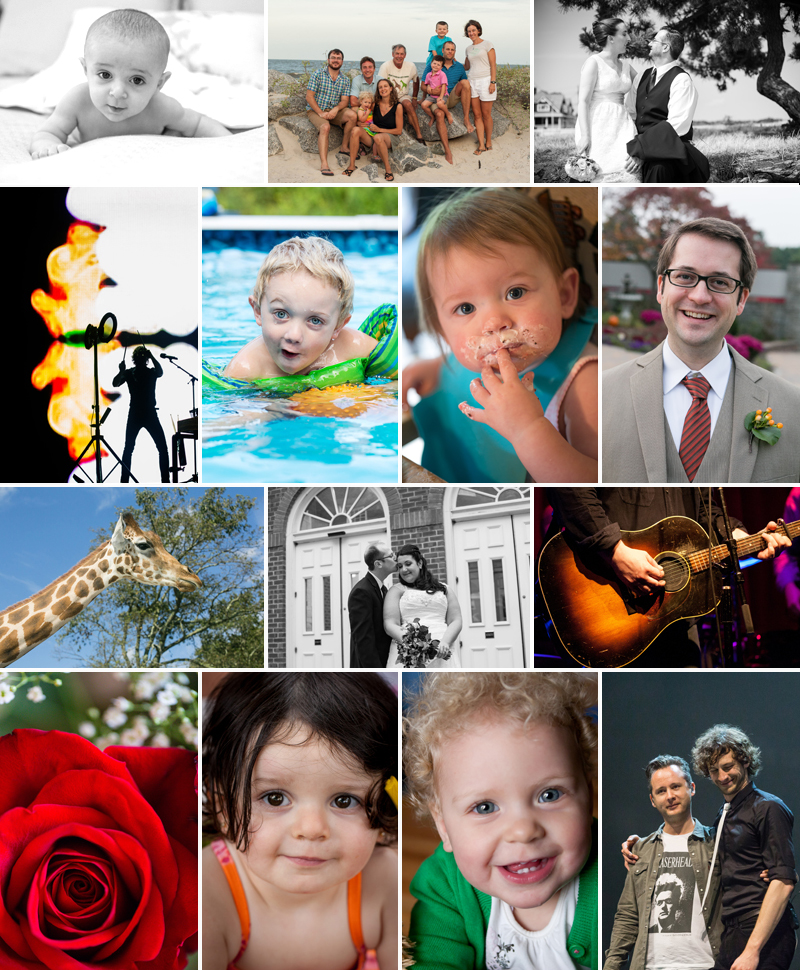 My Best Of week continues! These are my favorite moments of 2012 in picture form. In no particular order other than it made my layout look good:

1. Ben
I had the absolute pleasure of meeting Baby Ben this year. I photographed his parents' wedding a few years ago. This little man is a miniature version of his father from looks to personality. Congratulations, Jessica and Derek for the precious addition to your family!

2. Jekyll Island
I'm really bad about using my vacation days. In fact, my last official vacation was three years ago and I went to Milford Hospital for it. I took a week off for my ACL reconstruction surgery, but only a week! I had such a great time on vacation this year and met some amazing people; I'm definitely going to start taking more time off.

3. Eric & Michelle
My first of two solo weddings this year. Michelle had seen my work in a newspaper supplement several years before her engagement and held onto it until she was ready for her wedding. What a huge compliment! I'm so grateful they chose me to capture their special day.

4. Shooting at Radio City Music Hall
This silhouette shot was the first picture I took of the night and one of my favorites of the entire concert. I never could have imagined that my concert photography would lead me to such a historic venue or for such an amazing group of musicians. I still remember how nervous I was only moments before I took this picture.

5. James
I'm incredibly lucky to have so many beautiful young people in my life. James is the oldest of them and has a larger than life imagination and personality, not to mention an expressive face. He cracks me up to no end.

6. Aria
This little girl can hold her own even against her big brother, James, which is saying a lot. I chose a picture from her first birthday because it really captures her contemplation. As she's gotten older, Aria has taken a liking to the camera. As soon as I get down on her level, she gives me the biggest four toothed smile I've ever seen.

7. Andrew
While I didn't get a chance to visit with one of my oldest friends on either of the two trips I took to DC this year, we were able to catch up in October, at his younger sister's wedding. Andrew is one of my favorite people in the world and spending time with him and his family will always be a highlight of my year.

8. Giraffe at Six Flags Great Adventure Wild Safari (who tried to eat the car next to us)
My siblings and I made it down to the drive through wild safari before it closed for good in September. I laughed so hard, I was gasping for air. It was an amazing experience that I was able to share with family.

9. Zach & Rachel
My second solo wedding this year in the lovely town of Alexandria, Virginia. I've never had a more organized bride and groom: every part of the day was time lined perfectly. The Virgo in me couldn't have been happier! Rachel texted me as she was looking through the photos and told me they were more than they could have ever dreamed of. It's not hard to capture great images when you have two people so in love with each other!

10. Darren Jessee's Guitar
This was one of my favorite pictures of the entire year. Such a lovely, beaten up instrument; it really spoke to me about the musician behind it. It was the first photo I submitted to Groove Magazine to be used as a generic Music Listing Header and will now be a proud part of my portfolio.

11. Rose
The importance of this photo is that it was the first one I took on my new Canon 5D Mark III camera, using my new macro lens. The combination of those two pieces of equipment is a dream. I'd been saving for a new camera for three years, even repairing the shutter on my old camera instead of buying a replacement. When I got the confirmation that I was cleared to photograph Gotye, I upgraded. I can't tell you how much I love this camera.

12. Mia
Nobody has bigger, chocolate brown eyes than Mia or a better smirk. I've watched this adorable little girl grow up so much this year. There's nothing better than walking through the front door and having a child call out your name, even if it sounds like Awww-duh!

13. Grace
I'm sort of a celebrity with Grace, thanks to The Ugly Dance. Every time she sees me, there is this look of absolute joy on her face; sometimes she gets so excited she tries to run over to me faster than her little legs will carry her and she wipes out. The feeling is mutual, Grace!

14. Michael & Wally
There's no greater compliment as a photographer than having someone tell you they love your work, and it's even more special when they go out of their way to tell you that. One of the best moments of my year came in the form of an email: a proud father telling me he loved the pictures I took of his son. It doesn't get any better than that.

Up next: Best of fr EYE days!
Posted by Audra Napolitano at 10:47 AM

Email ThisBlogThis!Share to TwitterShare to FacebookShare to Pinterest
Labels: 2012, best of, pictures