Read my first book this year, knee pain and a concert tonight 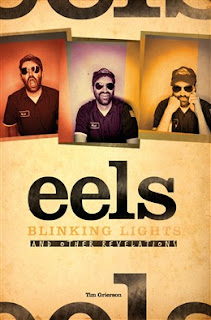 One book down this year! The first Eels biography wasn't easy to get through for several reasons. After I got my new glasses, reading was at least easier on my eyes, but it didn't make the book any more enjoyable. The chapters were massive with no place for breaks. I understand the author wanted to group certain things together, but give me a place to put it down for a while. I guess I don't like leaving in the middle of a chapter, so that's my own issue. There was a lot of rehashing of E's autobiography because he didn't give any interviews for this book and the majority of the rest of the book was the author's opinion on albums. I nearly lost it last night when the final chapter gave a song by song breakdown in seconds as opposed to minutes. I get it, you wanted to make a point that the songs were short,  but telling me that a song is 137 seconds instead of 2 minutes and 17 seconds is ridiculous. To do that for multiple songs was laughable. I own the albums, I know the songs are short. Move on. The only redeeming parts of the book for me were some very clever quotes from The Chet and some pictures I'd never seen before. 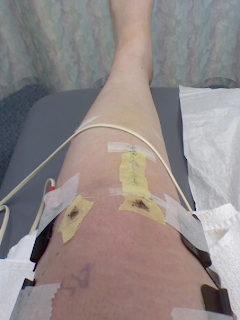 Old photo just after surgery
My knee has been acting up the past couple of days. I haven't done anything strenuous in my workouts lately, so I'm chalking it up to the weather. How great is it to be 31 years old and to be able to say, "A storm's a brewin'! I can feel it in my bones!!!" But I really do, and the Nor'Easter barreling down on the east coast is proof. The pain I feel is where the tiny little screw attach my reconstructed hamstring ACL to my tibia. 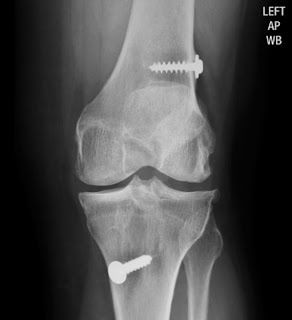 Even though the screws look huge, they're only about 3mm long
Lastly, I'm going to my first concert of the year tonight. FINALLY. It feels like it's been forever and a day since I saw a show, which is really only two months. I'm going to see what's being billed as "An Evening with Aimee Mann" at the Ridgefield Playhouse. I don't go to enough concerts in Connecticut, which is just plain stupid. I think this is going to be a great way to ease into goal #3 for the year: going to a concert every month. I'm not completely versed in Mann's entire catalog, but she's a great singer/songwriter that has worked with a lot of musicians I admire. (I'll expand that thought when I write my review of the show.) I'm expecting a mellow evening, seated in the front row of the balcony.
What I find ironic is that I haven't been back to the Playhouse in two and a half years. The first and last time I was there wasn't for a concert. I was playing THE pick up game of basketball with coworkers at the gym attached to the Playhouse. Maybe my knee is acting up because it knows I'm about to return to the scene of the crime...
Posted by Audra Napolitano at 10:59 AM